Eric Steinhart is Professor of Philosophy at William Paterson University. We invited him to answer the question “Is there a future for the philosophy of religion?” as part of our “Philosophers of Religion on Philosophy of Religion” series.

One of my last fully in-person classes, in the fall of 2019, was philosophy of religion. My class had a large percentage of atheists, not surprising for the northeast United States. What was surprising was that the atheists, who were all deeply anti-Christian, spent much of their time discussing how they charged their crystals (full moon or in the sun?), their favorite tarot decks (Waite-Rider or the Wild Unknown?), and the pros and cons of astrology apps (Co-Star or the Pattern?). But they didn’t care much about New Age spirituality, or identify as “spiritual but not religious”. They didn’t care much about atheism either. They just did their things. Since then many mass media articles have detailed the rise of these practices among younger Americans.

I’d like to try to understand my young students (obviously, they’re the future). But there aren’t any philosophy articles (much less books) about their practices or how they integrate them into their ways of thinking about reality. Nothing. Crickets. In this context, it would be absurd to say astrology or crystals involve consorting with demons. The Gallup organization recently reported that for the first time in their eighty-year history, less than half of adult Americans attend a church. By all demographic accounts, Christianity is declining rapidly in America. For the last decade, there have been many calls to expand philosophy of religion beyond Christian theism. Yet philosophy of religion, at least in the English-speaking world, remains intensely christo-normative. As far as I can tell, the academic journals and presses have not changed one bit. END_OF_DOCUMENT_TOKEN_TO_BE_REPLACED 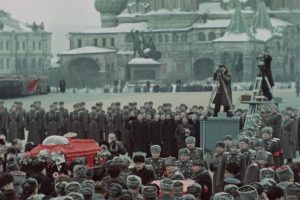 N. N. Trakakis teaches Philosophy at Australian Catholic University and writes and translates poetry. We invited him to answer the question “Is there a future for the philosophy of religion?” as part of our “Philosophers of Religion on Philosophy of Religion” series.

In his film, State Funeral (2019), director Sergei Loznitsa has assembled fascinating, and until now unseen, archival footage of the funeral staged for Joseph Stalin after the dictator’s death on March 5, 1953. We see Stalin lying in state in Moscow’s House of Trade Unions (the very site of the 1930s show trials), before being transported to the mausoleum in Red Square to lie beside Lenin’s embalmed corpse. One of the extraordinary features of the film is its beautifully stark and solemn, but perhaps also unintentionally subversive, portraits of the multitudes of ordinary people, officers and dignitaries that had descended upon the capital in the freezing cold to pay their last respects to the Great Leader, some in hysterics and tears (of sorrow? or secret satisfaction?), but most with blank faces, unwilling to show their hand, as they had learned so well to do.

Loznitsa provides no contextualising commentary (except for the closing credits where Stalin’s crimes are adumbrated). Instead, the viewer is compelled to make sense of what is happening, not as a detached observer but as a Muscovite immersed in the mourning throng. The director’s gambit is that one will emerge, not nostalgically glorying in the past (as the footage originally intended), but stupefied and despondent (which is how many critics have reportedly felt). This sense of disillusion and disorientation arises from the dark truths that the images reveal, subtly aided by the director’s editorial hand. END_OF_DOCUMENT_TOKEN_TO_BE_REPLACED