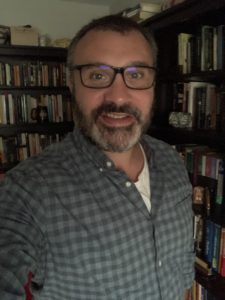 Jonathan Weidenbaum teaches World Religions, Ethics, and Philosophy in the Division of General Education at Berkeley College, NYC (email: jow@berkeleycollege.edu). We invited him to answer the question “Is there a future for the philosophy of religion?” as part of our “Philosophers of Religion on Philosophy of Religion” series.

One cannot stand before classrooms in a vibrantly diverse and international setting and fail to see the importance of the themes proposed by Troy DuJardin’s blog invitation (full disclosure: I have been teaching in New York City for the better part of two decades). To disregard a global perspective, the burning relevance of social issues, an attentiveness to how different faiths are actually lived and practiced, and the potential contributions of other intellectual disciplines, is to vindicate the suspicion that the philosophy of religion requires some very serious updating.

This is not to trivialize or dismiss the classic topics of our beloved subdiscipline, or to claim that such perennial questions—from the formal arguments for God’s existence to the relationship between faith and reason—can no longer be demonstrated as pertinent and compelling to students of all backgrounds. On the contrary: I believe that the themes listed by DuJardin and others may enrich the old questions rather than replace them.

An appeal of South Asian culture for philosophers of religion are its great metaphysical and theological systems; those of Sankara, Ramanuja…etc. And yet, it is some well-known imagery from the later Heidegger which came most readily to mind during my volunteer work in Northern India. It is not the landscape that affords the meaning of a Greek Temple, we are told in “The Origin of the Work of Art,” but the temple which sets the meanings of the landscape (Harper & Row, 1971). All genuine art, for Heidegger, discloses a broad context of significance, just as it is both shaped out of, and points to, what resists our full understanding. A temple sits at the core of almost every colorful village hanging off the foothills of the Himalaya, a region known as “the land of the gods” for its countless shrines and major places of pilgrimage. It is through conducting puja or worship at such places wherein the pious reinforce an entire value system and view of the cosmos in addition to communing with a deity.

It might be asserted that insights such as this can be of value, but it is arguments that are the stock-in-trade of philosophy. William James, however, instructs us that even the most exquisitely constructed and meticulously argued systems bear the stamp of a personality, and the latter includes a pre-theoretical hold on the way things are (Harvard University Press, 1975). While never eschewing the role of argument, classical American, Continental, and other philosophical traditions may assist in unpacking these pre-theoretical orientations at a phenomenological level, disclosing what truths may be found. For instance: reaching outward with our entire being toward the other, any other (a tree, a person), we attain both an integration of our previously fractured selves as well as a meeting with that which can never be reigned back within our abstract concepts or ego-centered schemes. I am writing here of Martin Buber’s I-Thou relations—what are achieved in and through the plain of our daily lives rather than above or beyond it (Simon & Schuster, 1970). Note how such an approach does not fall so neatly into the subject/object divide and refuses to exclude the ethical, our way of being and manner of comportment, from the question of what is.

Let us return to James. In the interests of capturing the somewhat messy and ambiguous texture of human experience as well as accentuating the morally robust form of life, James articulates a universe that is pluralistic, open-ended, and amenable to our efforts to improve it (Harvard University Press, 1975). This is in strong contrast to all pantheistic idealisms in which everything is undergirded by some all-encompassing perfection. Even James’s god is a finite being who benefits from our assistance (University of Nebraska Press, 1996). The relevance of such a picture of the divine for longstanding topics like the problem of evil should be evident.

Religion often affords us a prime example of meaning at its most intense. So does art, and it is not arbitrary that I have referred to a well-known philosophical treatment it above. I will draw my contribution to this discussion to an end by engaging with aesthetics just a little more—a brief nod toward one fruitful direction a multidisciplinary approach continues to take for the philosophy of religion.

A landmark work in philosophical aesthetics is John Dewey’s Art as Experience (Perigee Books, 2005). There are passages in this text which describe ecstatic and religious intuitions far more vividly than Dewey’s book focusing on religion, A Common Faith (Yale University Press, 1934). Art as Experience offers a phenomenology in which the most acute forms of aesthetic and spiritual feeling are not revelations descending from on high, but dynamics of meaning which arise from out of our worldly experiences at their most integral and fulfilled. Experience, for Dewey, just is the relationship of the entire organism with its environment, and not merely an occurrence within the confines of the psyche. Among the features of what Dewey calls a consummatory experience is an indefinable unity which underlies and pervades it. As art is both the material realization of such experiences and the means by which we are led to similar experiences, it is through works of art that we are “introduced into a world beyond this world which is nevertheless the deeper reality of the world in which we live in our ordinary experience” (Ibid, pg. 202). Of course, art includes a Hindu temple at the heart of a village in the Himalaya as much as a renowned painting.

Steven C. Rockefeller proposes that Dewey’s naturalism cannot account for one of the most definitive religious experiences: a sense of ultimate significance and transcendental peace in the face of suffering and death (Columbia University Press, 1991). Perhaps Rockefeller is correct. And yet, there is a growing number of works, under the inspiration of Dewey among others, which argue for the central role of the living body in the genesis of even the most elevated forms of meaning. For instance, I am now re-reading the chapter on music in Mark Johnson’s The Meaning of the Body (The University of Chicago Press, 2007). I can only suggest that if such an embodied aesthetics is shown to be of some value for illuminating the origin and structure of the religious dimensions of human life, then it is well worth exploring.

Johnson, Mark. The Meaning of the Body: Aesthetics of Human Understanding. Chicago: The University of Chicago Press, 2007.