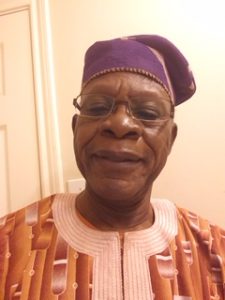 Segun Ogungbemi is Professor of Philosophy at Adekunle Ajasin University Akungba, Ondo State Nigeria. We invited him to answer the question “Is there a future for the philosophy of religion?” as part of our “Philosophers of Religion on Philosophy of Religion” series.

Let me say from the outset that I don’t intend to answer directly all the questions raised in the letter because of the limited words and space. With my backgrounds in Philosophy, Theology, Ethics and Religious Studies, I am delighted to make my little contribution because that is the essence of being in the field of philosophy including philosophy of religion. I want to premise my argument on three things that will guarantee the future of philosophy of religion which are: human beings, institutions and knowledge production.

Philosophy of Religion: a multicultural approach

By the middle of 20th century many African scholars had written about African cultural belief systems, theologies, and religious philosophies. Key early texts include E. Bolaji Idowu, Olodumare: God in Yoruba Belief (London: Longman, 1962) and John S. Mbiti, African Religions and Philosophy (Garden City: Doubleday & Company, 1969). These scholars have influenced my research on philosophy of religion and African religious beliefs, including publications that have generated intellectual discourse both locally and internationally, such as, Segun Ogungbemi, A Critique of African Cultural Beliefs (Lagos: Pumark Nigeria Limited, 1997); Segun Ogungbemi, ed. God, Reason and Death: Issues in Philosophy of Religion (Ibadan: Hope Publication, 2008); Segun Ogungbemi, “A Comparative Study of Olodumare, The Yoruba Supreme Being and Judeo-Christian God” Yoruba Studies Review Vol. 1: Number 1: Fall 2016, 41-64; and Solomon A. Laleye & S. Layi Oladipupo, eds. The Polemic of an African Philosopher: Essays In Honour of Professor Segun Ogungbemi (Kano: Flash Printing & Publications, 2016). These works on philosophy of religion are also interdisciplinary. Generally speaking, knowledge productions outlive their authors while their impacts continue as references of research and publications. It is one of the clearest indications offering assurance of the future of philosophy of religion.

Observable dangers to the future of philosophy of religion

1. Religious intolerance/extremism
Do believers really want the butcher’s knife of philosophy to touch their sacred belief system? Are they actually interested in any form of rational argumentation? Or is what they believe basic to their existential noetic structure such that seeking a rationale for their beliefs is the antithesis to faith? There are two categories of believers that abhor anything called philosophy and philosophy of religion in particular. There are religious zealots and extremists worldwide who violently protect their religious beliefs against any form of criticism. They restrict teaching of philosophy of religion in their communities and institutions. Parents of students in the two categories would not want them to take courses in philosophy of religion or read its textbooks or other books that are critical of their belief system.

2. Government policies on education
When a country has financial difficulties in funding university education, there is always palpable fear that some courses that are not considered relevant to national development are eliminated: Arts and humanities become the first victim.

3. Man playing God
In this digital age of science and technology, robotic engineering portends danger to religious beliefs. Man’s creativity is geared towards playing god using artificial intelligence for his comfort without any recourse to a Supreme Being or God acting in human history.

Solutions to the dangers highlighted above

1. Through out human history, religious intolerance and extremism have been a difficult issue to overcome particularly in the Islamic world and communist countries. The only way to penetrate their mindset is through literature and modern science and technology. Even with that there is no guarantee that they will not revolt once they sense their religious belief and belief system are being subjected to critical interrogation. Maybe some moderates among them will tolerate a little dose of philosophical inquiry as is common in other faiths.

3. If there is no human being, there will be no religion and philosophy and also no science and technology. Therefore, human existence is pivotal to knowledge of whatever humanity creates. In other words, I believe that as long as human beings exist, there will be a future of philosophy of religion.