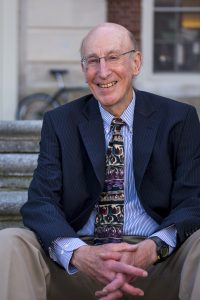 Doug Allen is Professor Emeritus of Philosophy at the University of Maine. We invited him to answer the question “Is there a future for the philosophy of religion?” as part of our “Philosophers of Religion on Philosophy of Religion” series.

The simple answer to the question of whether there is a future for the philosophy of religion is that there is. However, our answers must be dynamic, open-ended, complex, and contextually significant as we reimagine and reconceptualize our future and the role that philosophy of religion may play in relating to that future.

In simple terms, philosophy of religion has a future because philosophy and philosophical reflection on religious phenomena have a future. In many essential ways, philosophy addresses our deepest existential and normative concerns. As long as there is a future with human life, human beings identifying themselves with human cultures will experience existential crises. They will often respond with philosophical reflections, answers, ideologies, and systemic formulations that provide solutions or at least some meaning to their lives. This may be true, but such simple affirmative answers remain on the abstract, universal, essentialized, and decontextualized level. They are not sufficient for answering whether philosophy or whether any particular philosophies have a future in our contextualized relational world of 2022.

We often read influential philosophers, natural scientists, social scientists, and other reductionistic scholars contending that philosophy, or at least 90 precent of what has passed as philosophy, is now dead and has no future. This is not something new. Philosophy and especially different philosophies over the centuries have often been declared dead.

For example, those of my age may recall undergraduate philosophy courses that adopted texts by A.J. Ayer and similar analytic philosophers in which we learned that 90 percent of philosophy had been based on category mistakes and other confused thinking, and had no future nor even a past worthy of being regarded as real philosophy. This extended to philosophies of India as well as Asian, African, Indigenous, and other non-Western cultures. Such dismissed philosophies were not only analyzed as pre-philosophical, reaching back thousands of years before contacts with Western religious missionaries, explorers, economic traders, and other pre-colonial forces. They were usually ignored or dismissed as never having expressed what is real philosophy and with no philosophically meaningful future. Today most of us view the conceptualization of philosophy and the philosophical approaches by Ayer and others as extremely narrow, reductionistic, and arrogant. They are inadequate for addressing the future of philosophy and the philosophy of religion.

Without developing any of the necessary analysis, I submit that philosophy of religion also has a future because religion has a future. As long as human beings are situated in the spatial, temporal, historical, conditioned, finite, and mortal world so that they experience great suffering, hatred, cruelty, oppression, injustice, alienation, dread, and hopelessness, religion will continue to provide an emotional, imaginative, and ideological response. Obviously, this simple, abstract, universal, decontextualized submission is not sufficient for assessing whether specific formulations of religion, particular religions, and particular religious theories and practices contribute to the development of philosophy of religion in the future.

My view is that when it comes to future human and planetary flourishing, and indeed our species’ very survival, currently dominant religions and religious presuppositions, values, principles, and perspectives are more of the problem rather than the solution. They are often radically irrational (as contrasted with nonrational), anti-philosophical, anti-scientific, and sometimes promote religious tenets and practices that are extremely violent, racist, sexist, and environmentally destructive. Such religious orientations have limited value in developing a constructive philosophy of religion.

However, there are also strong religious orientations that emphasize the unity and interconnectedness of human and all existence. They emphasize that what unites us is more essential than what divides us, and this is a unity with mutual respect for differences. They emphasize love, kindness, and compassion; nonviolence and peace; social justice, inclusiveness, and relational harmony; sustainable living; and ego-deconditioned, action-oriented transformations to meet the needs of suffering and oppressed others. These religious orientations are of great value in developing a constructive philosophy of religion.

I’ll conclude by delineating several of the characteristics that will contribute to a needed future for the philosophy of religion. Such a philosophy of religion will embrace the valuable above mentioned contributions of philosophy and religion. It will dialectically relate local, social, and national perspectives with the global. It will be multidisciplinary and interdisciplinary, emphasizing open-ended, dynamic, interacting, and interconnected relations and structures. It will uphold the integral relations between theory and practice, and it will emphasize the primacy of practice in addressing real world crises. Such existential and contextualized crises have always been central to philosophy and religion. They now define and threaten any possibility for a future that will be meaningful, sustainable, and will allow for human, nonhuman, and planetary flourishing. Indeed, such a dynamic, creative, and transformational philosophy of religion has the potential to offer significant new openings by deconditioning and transcending many of the relational closures that at present severely limit our future.