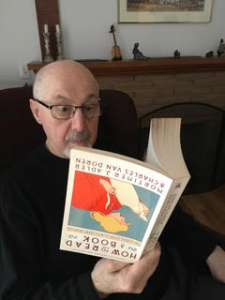 What is Philosophy of Religion? An Almost Serious Approach

The title “Philosophy of Religion” has three words which, when examined closely, will reveal the meaning of the discipline to which the whole title refers. (Or perhaps not, as the case may be.) Let us first inspect the word “philosophy” and then the word “religion”. In the end we shall see that the little word “of” holds the key to the most useful definition of the title; for whatever “philosophy” and “religion” mean, we know right off that the title refers to a philosophy that belongs to, or is applied to, religion.

What is philosophy? Philosophy is a rational discipline from which we learn more and more about less and less until someday we know everything about nothing. Or going the other way, we learn less and less about more and more until someday we know nothing about everything. The crucial question arising from these two definitions is itself philosophical in nature. Which should you rather know: everything about nothing or nothing about everything? For the benefit of the conscientious reader there is a right answer to that question.

I faintly hear someone saying, “get serious!” OK, I will, but you won’t like it. What I’m going to offer you is a functional and compendious definition of philosophy that is not entirely serviceable. But a word of caution before you proceed. You mustn’t say this definition out loud for fear of frightening your dog or alienating your other friends, though interjecting it skilfully into a cocktail conversation among the literati will garner you a heap of praise. Here goes: Philosophy is a rational discipline in which careful attention to detail, logical thinking and imagination are used to question, describe, analyse and speculate upon the fundamental assumptions of our beliefs about reality or some limited aspect of it, while striving to be clear, truthful, consistent and reasonable in its spoken, unspoken and written accounts. Admittedly, that was a bit long. But how to shorten it without amputating some of its vital limbs – that is a vexing question. We do need to retain the ideas of both analytic and synthetic thinking, with the understanding that when we engage in such thinking we are asking questions as well as making statements. Perhaps we could employ the term synalytic thinking. On second thought, that would only complicate the issue and raise unnecessary additional questions. Let us, then, tentatively settle upon the following: philosophy is a rational discipline in which analytic and synthetic thinking are trained upon the fundamental assumptions of some aspect of the world, in this case, religion. But now we must ask, what in the world is a religion?

Defining “religion” is like trying to wallpaper an alligator. On the one hand it is tempting to say simply that a religion is a system of beliefs with god at its apex. But this would make the definition too narrow. It would eliminate Theravada Buddhism, the non-dualistic schools of Hinduism such as Advaita Vedanta, and various kinds of polytheism. Many systems of belief that are labelled “religion” do not posit the existence of one transcendent being that is thought to be worthy of worship. On the other hand one might modify one of Tillich’s ideas and say that religion is simply a belief system that organizes life around that which ultimately concerns some group of people. This, however, would include practically everything upon which we may set our highest interest and around which we can organize our lives, making the definition too broad.

Why, we may rightly ask, are all these different systems of belief called “a religion”? It’s as though a giant strode about the earth collecting one after another of these belief systems in a huge basket: B was included because it was somewhat like A; C was included because it was somewhat like B; D was included because it was somewhat like C; and so on to n-1 and n. But when the giant was done he looked in his basket and discovered that n had almost nothing in common with A. Unwittingly he had gathered his religions according to a “family resemblance” method of collection. But why did he collect A in the first place? I don’t know. Maybe it seemed like a good idea at the time. Or perhaps it was because the first system of belief he came across was focused upon a transcendent source that provided meaning for his life. Whatever the reason, his first and last collections had much less in common than his first and second collections.

Is there anything we can do to build a definition of religion that is both accurate and serviceable? One approach might be to “bite the bullet”; in other words, to go for the generality and live with the consequences. We could say that a religion is a life-guiding system of belief that often but not always has a transcendent being at its apex. We do catch communism with such a wide net, but then calling that particular belief system a religion is hardly a new idea, though admittedly communists have never liked it very much.

Still, something doesn’t feel quite right about my attempt to define “Philosophy of Religion”. I seem to have knotted my thinking into a mental cramp. I have accomplished this by trying to make my definition of philosophy of religion at one and the same time general and specific, as well as concise and expansive; and I also want it to be portable, so to speak. What to do? The thought now occurs to me that there is no need to satisfy all these characteristics at one stroke. For where is it written that we must say everything about something at once? So let’s make another run at the definition and do it in stages. I’ll call this effort an engaging definition, for it is supposed to engage the reader or hearer to ask successively more specific questions about previously more general answers. It will involve a dialogue that goes something like this:

Conclusion: If you are asked what Philosophy of Religion is, don’t try to say everything at once. If you do you will find yourself either composing a very long definition that may be accurate but won’t be serviceable, or, settling for a shorter version that will quickly invite counter-examples. Begin instead with a short and grammatically correct definition that properly relates the two main ideas whose contents at first you keep indefinite. Then, with questions and answers, define the contents. You can begin by saying that it is a rational discipline in which philosophical thinking is applied to a religion. You can even leave off the first part, “a rational discipline in which”, if the context is agreeable to doing so. The short of it is this: “philosophical thinking applied to a religion”. If you have a penchant for parsimony you can shorten even further to “philosophical thinking about a religion”. You can then begin to fill it with accurate content by asking your audience, “What further questions do you have?”

ACKNOWLEDGEMENTS: Thank you Steven Muir and Travis Dumsday for your helpful comments on the penultimate draft.