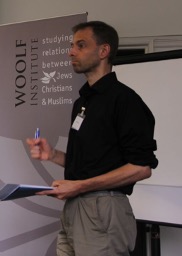 Mikel Burley is Associate Professor of Religion and Philosophy at the University of Leeds, UK. We invited him to answer the question “Is there a future for the philosophy of religion?” as part of our “Philosophers of Religion on Philosophy of Religion” series.

A central concern articulated in recent years by critical voices both inside and outside Western philosophy of religion has been this subfield’s perceived lack of religious diversity. It has been claimed that Western philosophers of religion are too often preoccupied with “the rationality of theism” (Schilbrack 2014, p. 3), a theism detached from the particularities of historically and geographically rooted religious traditions (Knepper 2013). These critical voices have, on occasion, included my own.

In what follows, I wish to do three things. First, I acknowledge a qualification to the kind of critical assessment that I and others have made of Western philosophy of religion. Second, I give due recognition to the difficulties of expanding the subfield in ways that remain identifiably philosophical. And third, I advocate the need for methodological experimentation as a response to these difficulties.

First, the qualification. This can be outlined by noting a perceptive observation made by Finlay Malcolm in a review of a recent book of mine. Having quoted my contention that much of what goes by the name of philosophy of religion has been tied to “a small cluster of questions pertaining to an ahistorical and decontextualized theism” (Burley 2020, p. 2, quoted in Malcolm 2020, p. 5), Malcolm remarks that, in fact, “contemporary philosophy of religion is highly contextual, addressing the most central and important questions facing many religious people living in Anglo-American culture.” Such philosophy of religion may be viewed, Malcolm avers, “as the organic development of a discipline, responding to its cultural and academic context” (p. 5).

Malcolm is not recommending that philosophers of religion, whether Anglo-American or of any other stripe, should rest content with this situation. He is offering the reminder that English-language philosophy of religion is the way it is for understandable reasons: its practitioners have engaged with the forms of religion and forms of philosophy with which they were best acquainted. Now that the cultural and academic environment is changing, Malcolm adds, a need has indeed arisen for philosophy of religion to diversify—and he graciously notes that my book instantiates a response to that need.

It is all well and good, in principle, for critical voices to enjoin Western philosophers of religion to be attentive to a wider array of religions—Buddhist, Hindu, Sikh, Jain, Daoist, Yorùbá, small-scale indigenous, and numerous others—but fulfilling this aspiration is no easy task. Among the difficulties, two are especially salient. First is the difficulty of becoming sufficiently conversant with a given religion to be able to do justice to its intricacies. This difficulty increases exponentially if one wishes to pursue philosophy of religion in a multireligious mode. There are good reasons why most scholars of religion specialize in one or two or, at most, a handful of religions—the reason being that there is value in gaining expertise in a particular religion rather than becoming a dilettante with a relatively superficial knowledge of many.

A second obstacle is that of finding recognizably philosophical debates with which to connect one’s study of religions other than the Abrahamic faiths or the rarefied theism that has been the mainstay of Western philosophy of religion. Admittedly, there are laudable examples of how discussions of non-Abrahamic traditions can be plugged into existing debates. For instance, the theme of karma and rebirth, prevalent in traditions originating in India, has been brought into engagement with versions of the problem of evil; Buddhist denials of a persisting self have informed treatments of personal identity; and debates concerning religious diversity and religious pluralism lend themselves naturally to the comparative study of multiple religions.

But what about, for example, African or Native American indigenous religions, or topics such as divination, spirit possession, animal sacrifice, pilgrimage, mortuary cannibalism, accusations of witchcraft, reverence for ancestors, among many others? These are all matters of interest, yet finding or inaugurating ways of discussing them that will be recognizably philosophical to readers of philosophy publications requires imaginative effort.

Tackling these challenges calls for a plurality of methods—and this is my third point. A notable work of anthropology, Anthropology as Cultural Critique (Marcus and Fischer 1999), has the subtitle An Experimental Moment in the Human Sciences. Similarly, we might envisage our current predicament as an experimental moment in philosophy of religion, which demands innovative thinking. The available options are manifold. They include turning to other branches of philosophy and to disciplines other than philosophy as a means of diversifying both the content and the methods at our disposal.

My own work has drawn upon cultural anthropology, folklore studies, literary studies, theology (and thealogy), and sundry areas of religious studies. The danger in such interdisciplinary adventures is that the project is perceived as losing its distinctively philosophical character. But if this distinctive character is currently too narrow, then losing it—or, better, modifying and augmenting it—may be exactly what is needed.

Like anthropology, philosophy of religion pursued with a cross-cultural sensibility is capable of sharpening our awareness of the possibilities of sense embedded in various cultures. Utilizing ethnographic sources—even participating in fieldwork oneself—need not dilute the philosophical acuity of one’s analysis, but it is likely to demand a shift of focus, away from standard arguments and towards more exploratory questions concerning the meaning, value, and significance of religious ways of being human. It will also necessitate ongoing critical scrutiny of the concept of religion itself.

None of this obviates the difficulty of getting to grips with forms of religion and culture with which one is presently unfamiliar. One cannot simply read the existing debate in the philosophy journals, for there is unlikely to be such a debate—as yet. Nor can it be guaranteed that readers will see the philosophical importance of work that reaches across disciplines. Even if framed explicitly as interdisciplinary, it still runs the risk of falling between disciplinary stools. The risk is, however, worth taking; it is the spirit of experimentation that will inject freshness into the subfield, contributing towards a radically diversified philosophy of religion for the future.

Schilbrack, Kevin. 2014. Philosophy and the Study of Religions: A Manifesto. Malden, MA: Wiley-Blackwell.