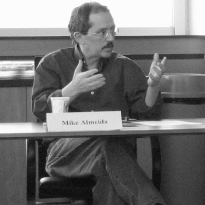 Michael Almeida is Professor of Philosophy and Classics at the University of Texas at San Antonio. We invited him to answer the question “What norms or values define excellent philosophy of religion?” as part of our “Philosophers of Religion on Philosophy of Religion” series.

Methods, Norms, and Values in Philosophy of Religion

Methodology in the philosophy of religion, with few exceptions, has not received much discussion.1 It is a common methodology—but not one that is especially self-conscious—to approach the broad range of issues that characterize philosophy of religion with what we might call vastly overconfident aprioricity. John Mackie illustrates this method. Mackie approaches the problem of evil with a striking degree of confidence in our a priori knowledge of the traditional attributes of God. He writes: ‘. . . in its simplest form the problem is this: God is omnipotent; God is wholly good; and yet evil exists. There seems to be some contradiction between these propositions, so that if any two of them were true the third would be false.’2 Perhaps as famously, Mackie boldly declares that ‘any adequate solution’ to his version of the problem of evil must abandon the proposition that God is omnipotent, or abandon the proposition that God is wholly good, or abandon the proposition that there exists evil. It’s out of the question for Mackie that, on the contrary, we might doubt his a priori intuitions about the concept of omnipotence or perfect goodness. It’s bizarrely regarded as out of the question to suggest that these intuitions might be mistaken or not especially well-informed. The idea that we might propose an alternative analysis of, say, omnipotence, Mackie relegates to the bin of fallacious solutions.

Mackie is not alone. We find a similar degree of confidence in J. Howard Sobel’s discussion of the problem of evil. Sobel considers the concept of omnipotence to be fully determinable a priori.

Rather than practice the doctrine of Humpty Dumpty on ‘omnipotence’ and ordinary synonyms of it such as ‘almightiness’, I have tried to call a spade a spade, and having done that to defend the possibility of ‘omnipotence’ naturally understood. Questions concerning omnipotence—what it comes to and whether it is possible—are properly prior to questions of God and omnipotence.3

Indeed, Sobel is critical of Plantinga’s departure from this straightforward apriori method.

Plantinga suggests that we may, without answers to the first general question about omnipotence, shift in reasonable hope of doing better to the second particular question of ‘God’s omnipotence.’ After finding difficulties with two definitions of omnipotence, he says: ‘But perhaps . . . even if we cannot give a general explanation of omnipotence, we may be able to say what God is omnipotent comes to.’ This methodology complicates matters and is strange.4

The approach of Mackie and Sobel is not uncommon among philosophers of religion—even if not everyone is as bold. The main problem with the excessively confident apriori method is that it simply ignores the phenomenon of ‘metaphysical surprise’. Surprising metaphysical facts—otherwise occluded facts—are typically revealed when we apply familiar concepts in unfamiliar contexts. It is an otherwise occluded metaphysical fact that moral perfection is consistent with not fulfilling every moral requirement. How could such a fact be revealed? Consider an essentially morally perfect being facing a necessary moral dilemma. Moral dilemmas—including necessary moral dilemmas—are such that, no matter what a moral agent does, she does something wrong. Such dilemmas arise in cases where, for instance, there is no best possible world, and they are structurally equivalent to rational dilemmas.5 A morally perfect being could find itself in a necessary moral dilemma.6

The methodological moral we ought to draw is that recent advances in metaphysics, epistemology, logic, and value theory—and there are lots of them—really should inform any a priori intuition we might advance in the philosophy of religion. Uninformed, commonsense intuitions—the kinds of intuitions that Mackie and Sobel frankly offer—are not especially helpful or reliable. Common answers to questions raised in the philosophy of religion depend on—more or less conscious—ontological commitments. Does the Free Will Defense depend on the existence of libertarian free will? No, it doesn’t, but free will defenders hardly ever get around to questioning libertarian free will. Does the problem of modal collapse depend on actualist ontologies? Yes it does, but the case against modal collapse never gets around to questioning actualist ontologies. Must cosmological explananda include change or motion or coming to be or contingency? Not at all. But we never get around to noticing that our world might not genuinely include any of these. The methodological moral is perhaps obvious, but it is much neglected. And that is perhaps due to the steep climb involved in coming to terms with so much philosophical work before we come to terms with problems in the philosophy of religion.