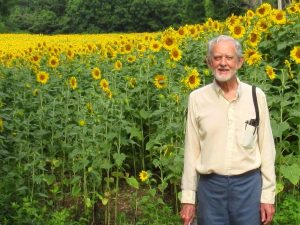 Rem B. Edwards is the Lindsay Young Professor of Philosophy Emeritus at the University of Tennessee. We invited him to answer the question “What values or norms define excellent philosophy of religion?” as part of our “Philosophers of Religion on Philosophy of Religion” series.

(1) They aspire to fulfill credible criteria for any plausible rational theology or belief system. They apply rational criteria of explanatory adequacy such as logical consistency, coherence with other reasonable beliefs, simplicity without sacrificing comprehensiveness, clarity, fruitfulness for further inquiry, fairness or impartiality of judgment, freedom from external and internal non-rational pressures, and conformity with experience. “Experience” is broadly construed to include sensory, introspective, religious, aesthetic, moral, logical, and mathematical intuitive givenness.

(2) They search for religious views that are compatible with and not falsified by the structure of the world disclosed by natural science, which is itself constantly evolving. Natural science does not dictate the contents of a rational philosophy of religion, but it rules out many familiar religious beliefs and traditional cosmological convictions as unviable and untenable. For example, rational persons cannot accept a literal six days of creation in the face of astronomy and paleontology, cannot reject evolution in the face of biology, and cannot affirm rigid and universal determinism in the face of quantum physics. Excellent philosophers of religion reject the ideas that Adam and Eve once literally existed in an idyllic Garden of Eden, and that anything of any theological importance depends upon their having so existed. They cannot affirm that death originated as a consequence of human misbehavior, since organisms were dying for eons of time before human beings evolved. Being compatible with natural science is not the same as being proved by natural science. The philosophy of religion aspires to philosophical proof, evidence, and reason-giving in a very broad sense, not to empirical or sensory inductive evidence alone.

(3) They try to provide some plausible and coherent account of the immediate and the ultimate meanings and values of human life, indeed of all life and all of existence. Their accounts should be firmly grounded in and compatible with scientific knowledge and critical rational reflection, as well as with our most profound religious, moral, and aesthetic sensitivities.

(4) They strive for positive valuational and ontological results that go beyond negative critiques. They strive to help “real people” (philosophers included) find reasonable and defensible religious views that they can actually affirm and live by and with, always subject to improvement. Destructive philosophizing is easy; constructive philosophizing is much more difficult. The best philosophers of religion venture both constructive results or conclusions and destructive critiques of alternatives. High creativity transcending what has gone before will be involved in reaching constructive religious results. We want the most reasonable religious (and overall) approximation to definitive truth we can get that will help us live moral, spiritual, and conceptually meaningful lives.

(5) They recognize that rational persuasion is a significant way of respecting others, and that it is morally preferable to settling religious disagreements in non-rational ways such as social ostracism, political exile, threats, intimidations, purely emotionalistic appeals, coercion, torture, brainwashing, deceit, and bombastic rhetoric. Rational excellence in religious thinking (and elsewhere) is a moral solution to a moral problem.

(6) They develop and utilize their critical as well as their constructive capacities. Excellent critical philosophizing does not apply exclusively to pro-religious affirmations, whatever these might be. Critical thinking applies equally to anti-religious perspectives, whatever these might be—atheism, agnosticism, positivism, wholesale skepticism, or whatever. What are their basic assumptions, and are they rationally justified? Wholesale skepticism has never completed its work until all of its resources have been turned in upon itself.

(7) They are constantly aware of human limitations, which apply to the whole enterprise of philosophy. A large place is made for honest disagreement. We are now (and always?) far removed from those religious and all other philosophical beliefs on which all competent rational persons are ultimately destined to agree. All philosophers eventually just run out of reasons and evidence-giving procedures and reach “rock bottom,” where intuitions of some kind take over. Regrettably, not all competent rational authorities reach the same rock bottom intuitions. Every thought system, religious or otherwise, includes some essential convictions that cannot be proved without circularity within that system, or elsewhere. Philosophical problems may be infinite, but philosophical procedures are always finite. Rationality applied to all religious and philosophical problems is simply not powerful enough to bring all competent rational authorities into complete intersubjective agreement, however desirable that might be. This is a limitation of all of philosophy, not peculiarity of the philosophy of religion.

I have long maintained that we can never hope for or expect anything more from any kind of philosophical excellence and efforts than an enlightened faith. Realistically, we will never have complete rational intersubjective agreement and certainty. (About that we can be almost certain.) Human rationality always functions somewhere between the extremes of absolutely conclusive “proof” and no proof at all. Of course, an enlightened faith is very different from, and much more desirable than, a blind faith, but variable basic human and personal values, as well as inescapable human historicity and unique personality differences, are always constitutive of anyone’s enlightened faith, which is always grounded by degrees in who we actually are and/or wish to become. Ultimately, after doing our very best, all of us just have to judge and decide for ourselves. Excellent philosophers of religion know this. Fallibilstic modesty is one of their intellectual virtues. They allow for honest intellectual doubt, disagreement, and growth.

(8) They recognize that the philosophy of religion is a value-laden enterprise through and through. This is most obvious, perhaps, in the idea of perfect spiritual excellence or supreme worshipfulness, as expressed, for example, in St. Anselm’s concept of “that being than whom none greater (better) can be conceived.” “Divine perfection” or “ultimate goodness” are axiological as well as ontological notions. Conceiving of ultimate perfection is always a valuational project, even if facts have some bearing. Excellent philosophers of religion recognize and analyze the values inherent in religion. They wonder what ultimate reality would have to be like in order to be supremely worthy of human worship, love, service, devotion, and ultimate concern. Until philosophers of religion reach agreement about what is ultimately admirable or valuable, they must agree to disagree about the perfect-making attributes of supreme reality, and about many other matters of religious concern. Their conceptions and preconceptions will occasionally yield to profound, novel, and ongoing enlightenment about and insight into supreme worshipfulness, goodness, and reality.