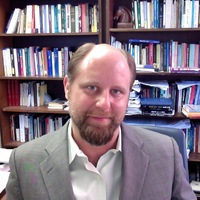 Derek Malone-France is Associate Professor Philosophy and of Religion at the George Washington University. We invited him to answer the question “What does philosophy of religion offer to the modern university?” as part of our “Philosophers of Religion on Philosophy of Religion” series.

I will take a somewhat different tack in answering this question than that taken by previous respondents. This is not because I disagree with the general drift of their responses, which have predominantly focused on the intrinsic value of philosophy of religion – that which is associated with the particular subjects studied and questions raised therein. But since they have already admirably defended the thesis that what we study within the field of philosophy of religion has significant value as part of the broader discursive landscape of the modern university – and, by extension, as part of modern culture at large, I feel free to use my response to describe another, distinct and, I think, substantial dimension of value that is offered by philosophy of religion to the modern university.

Not surprisingly, while discussing the intrinsic value of philosophy of religion as an academic field, a number of the previous respondents have pointed to the inherently interdisciplinary nature of the field as a primary source of its intellectual robustness, diversity, and relevance. The interdisciplinarity of philosophy of religion is especially broad, deep, and substantive, because the field not only straddles two traditional academic disciplinary categories – namely, ‘philosophy’ and ‘religion’ – but also one of those categories – namely, ‘religion’ – is not best understood as a ‘discipline’ at all, but rather, as a major (i.e., departmentalization-worthy) locus for a wide range of necessarily interdisciplinary modes of inquiry related to a shared object or theme of exploration.*

I would like to focus, here, on what we might call the extrinsic value of this particularly broad, deep, and substantive interdisciplinarity that is embodied in philosophy of religion, for the wider university. What I mean by this is, the value presented by philosophy of religion both: 1. as a model of what real, rigorous, authentically interdisciplinary work looks like (I don’t think I even need to argue for the claim that most of what passes for ‘interdisciplinarity’ at most universities today does not meet this standard), and 2. as a source of faculty and potential administrators who understand and know how to do – and to recognize, cultivate, and evaluate – such work.

I’ll illustrate this value with reference to my own somewhat eccentric career arc, which has afforded me the opportunity – and presented me with the necessity – to draw deeply upon the interdisciplinary training I received as a graduate student in a degree program in philosophy of religion. I have had to do so in order to understand and navigate parts of the university far removed from this field and, ultimately, to help other faculty and administrators, in those other parts of the university, to better understand and navigate the changing exigencies of research and teaching in an intellectual and social landscape that increasingly demands thought and action transcending traditional disciplinary boundaries and the institutional silos associated with them. I believe that I was better prepared to do all of that by my training in philosophy of religion than I would have been by training in almost any other academic field that currently exists—and I hold this belief as someone who has meaningfully surveyed far more of those other fields than most inhabitants of the modern university ever do.

I received my graduate training in philosophy of religion at Claremont Graduate University, at a moment in the life of that institution when the constellation of degree programs associated with the interdisciplinary study of religion were ascendant and expanding (and powerfully augmented by collaborative relationships with programs and faculty in related fields at the other Claremont Colleges and the Claremont School of Theology). There, I was exposed to the wide range of both philosophical and religious perspectives represented among the faculty, as well as perspectives and methods from an array of other disciplines, ranging from history, archeology, and linguistic anthropology to political, social, and media theory. Moreover, as I’ve discussed elsewhere, philosophy of religion is one of the few academic fields in which liberal and conservative, revisionary and traditionalist thinkers have never stopped talking to one another directly and taking each other’s positions and arguments seriously.

When I graduated in 2001, the great humanities retrenchment across American higher education was, of course, already well underway. With few good options available for employment as a philosopher of religion, per se, I accepted a five-year, faculty-like postdoctoral position in the innovative multidisciplinary University Writing Program – now the Thompson Writing Program – that had just been founded at Duke University. The Thompson Program was created to embody an emerging shift in composition theory and writing pedagogy, one that recognizes the counterproductive nature of traditional undergraduate writing curricula, in which students have historically been trained to think and write as though they would all become English majors.

In the new, multidisciplinary model of writing program, instructors are drawn from a wide range of disciplines, from across all of the academic divisions, and they learn from and collaborate with one another, in order to construct courses and curricula that encourage students to explore the wide diversity of research methods and writing conventions and genres represented by different disciplines and fields in the academy. The point is not to turn the students into a specific kind of writer but, rather, to teach them to move nimbly between the multiple forms of research and writing they will encounter as they navigate their way through the multivalent required and elective curricula they must pass through in order to graduate (and in life after graduation, as well).

Typically, such writing programs augment the introductory first-year writing course, in which students are initiated into this more complex and sophisticated understanding of the writerly environment they’ve entered, with additional, more advanced writing-focused courses in the various major and minor degree programs into which students eventually make their way. These “writing in the disciplines” (or, alternatively, “writing across the curriculum”) courses deepen students understanding of the specific research methods and writing conventions and genres associated with their chosen fields of study. Those who administer the writing in the disciplines (WID) components of writing curricula are typically responsible for recruiting disciplinary faculty from each of the undergraduate degree programs on their campuses, training these faculty in current best practices in writing pedagogy, and assisting them in constructing substantial and productive WID courses for their students.

Obviously, to do this sort of administrative and faculty development work well, one must learn as much as one can about the particularities of research and writing in each of the different disciplines and fields represented in the curriculum, in order to understand the unique exigencies of teaching and learning that faculty and students face in each of them. This requires deep and sustained conversation with not just the teaching faculty, but also the chairs and program directors, the undergraduate and graduate students, and graduate teaching assistants in each department or program. Such conversation, in turn, requires genuine curiosity about the methods and modes of thought at work in other disciplines and a high capacity for a sort of continuous re-training of oneself.

As a graduate of a program in philosophy of religion, I immediately felt at home in WID. What clearly seemed like an overwhelming (or just off-putting) expectation to many of my postdoctoral peers, who had been trained in more classically disciplinary fields, seemed to me both natural and exciting. It represented the opportunity to continue to expand the range of my knowledge and training across further disciplinary boundaries, in just the way I had been taught to do so in philosophy of religion. That is, to take each new field I entered seriously, on its own terms, to learn its methods and presuppositions as they are understood by its core practitioners. To be an intellectual polyglot, but not a dilettante. And, ultimately, thereby, to develop a vision of the modern university that recognizes both the overarching coherence of the total educational enterprise and the diversity of valid modes of inquiry and understanding represented therein. Of course, these capacities are not merely desiderata for those who work in writing programs; they are increasingly requirements of meaningful intellectual and practical engagement with the profound challenges facing the modern university and, indeed, humanity at-large.

Now, fifteen years on, I am a tenured faculty member at a major university, at which I hold appointments in three separate departments; I have served as Executive Director of a writing program that serves ~15,000 students per year at both the undergraduate and graduate levels; and I have founded multiple successful interdisciplinary centers and initiatives, drawing substantial external funding and attention to my university. All of this – my own hard-fought climb up the faculty ladder and the contributions I have made to my institution – was made possible, in no small part, by the intellectual flexibility, curiosity, and humility about other ways of analyzing and interpreting the world that has been instilled in me through my graduate training and ongoing professional experience in philosophy of religion.

In this time of great and pervasive intellectual and cultural upending in which we are caught, the modern university can use as many people with such flexibility, open-mindedness, and humility as it can get. And those graduating with degrees in philosophy of religion should look for every opportunity to leverage their capacities in these regards, to forward their own careers, as well as the collective aims of higher education.
* It seems worth noting that, along their way to justifying the intrinsic value of the field of philosophy of religion, the previous respondents have, I think, also presented the outlines of a compelling collective case for the claim that the category of ‘religion’ – howsoever complicated and contested it may be – is conceptually coherent enough to justify its being – and continuing to be – such a locus.