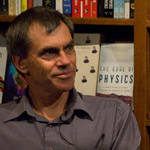 While there are many other parts of philosophy of religion, the part that seems to me to be both central and of the greatest interest is the assessment or evaluation of worldviews.

There are three major stages in the assessment of worldviews.

Second, there is internal critique: showing that a given best formulation of a worldview fails on its own terms. Saying exactly what ‘failure on its own terms’ amounts to is not entirely straightforward: logical inconsistency–including logical inconsistency with data–is the paradigmatic case, but some may be tempted to invoke ‘incoherence’, or ‘probabilistic inconsistency’, or ‘explanatory inconsistency’, or the like. Of course, in giving an internal critique of a worldview, you should be careful not to add claims to the worldview that proponents of the worldview reject even though you accept the added claims and think that everyone else ought to accept them, too. We already know that the worldview under consideration conflicts with the one that you favour!

Third, there is comparison of theoretical virtue: determining whether one worldview does better than another on the proper weighting of simplicity, fit with data, explanatory scope, predictive accuracy, and so forth. (Naturally, there is more to be said–and argued–about exactly what makes for theoretical virtue.) Here, it must be stressed that this the third stage in a three-stage process: there is no point moving to this stage if we do not have statements of worldviews that have been developed with the same degree of care to the same degree of detail that (as far as we have been able to determine) survive internal critique.

In my opinion, philosophers of religion are often confused about the proper use of derivation — ‘argument’ — in philosophy of religion. Clearly, there is a proper use for derivation in the articulation stage: derivations can draw out the consequences of claims that belong to particular worldviews. Equally clearly, there is a proper use for derivation in the internal critique stage: derivations can be used to establish that best formulations of given worldviews are subject to internal defeat (‘reductio’). However, there is no role for derivation when we reach the stage of comparison of theoretical virtue, given (i) that we have sufficiently full articulations of the worldviews under consideration; and (ii) that the worldviews under consideration have survived internal critique. In particular, then, despite widespread belief to the contrary, there just is no proper role for ‘reductios’ that mix together claims drawn from competing worldviews.

My take on apologetics is slightly different from that of Paul Draper, John Schellenberg, and other contributors to this blog. Most existing apologetics — for any of the kinds of worldviews canvassed above — is rubbish, not least because the arguments on offer violate the conditions on proper use of derivation that I have just articulated. However, there is nothing in these considerations that rules out its being the case that, among those best formulations of worldviews that are not subject to internal defeat, one is more theoretically virtuous than all the rest. A proper apology for a worldview would establish this. It would start with statements of all of the competing worldviews developed with the same degree of care to the same degree of detail, eliminate all of the statements subject to internal defeat, and then run through the comparison–on the proper weighting of simplicity, fit with data, explanatory scope, predictive accuracy, and so forth–that establishes the superiority of the favoured worldview. Good luck to anyone who actually wants to try to follow this process! (Even following this process in the comparison of two worldviews which survive internal critique is clearly a very demanding task.)