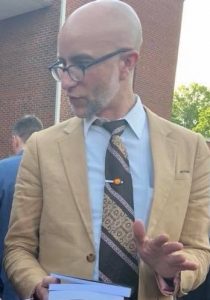 Nathan Eric Dickman is Assistant Professor of Philosophy at University of the Ozarks. We invited him to answer the question “Is there a future for the philosophy of religion?” as part of our “Philosophers of Religion on Philosophy of Religion” series.

Sometimes critics are accomplices. Many critics misrecognize that we contribute to the very creation of the object about which we have objections! This is the case with many recent challenges to what has passed for “the philosophy of religion” over the last forty years or so. That is, critiques posed by scholars in the last twenty years create and bolster, rather than re-envision or expand, so-called “the” philosophy of religion. Consider, for example, the call for contributions to this discussion. As DuJardin writes, “The business of evaluating religious truth claims and beliefs, once our meat and potatoes, is now thought to be fraught with bias and ideology…” When was this “once”? I think the primary impetus was Plantinga’s faith-based epistemological rhetoric influential in the 1980s and through the 1990s (Schilbrack 2014, p. 200). However, before that—and happening concurrently throughout the last four decades—many philosophers have examined religions and developed religious philosophies in hermeneutic, feminist, and other terms. What of Ricoeur’s approach to the symbolism of evil, for example (1969)? Or, Irigaray’s philosophies of divine women (1993) and Pamela Sue Anderson’s feminist philosophy of religion (1998)? Or, Nasr’s perennialist approach to comparative religions (2006)? Or, Nishitani’s philosophical developments of shunyata (1983)? Or, Tillich’s analysis of the truth of religious language (1957)? I could go on, but I highlight these as some among many philosophies of religions that are rarely mentioned within institutionalized philosophy of religion or even by recent critics of it.

I. Stop Misrecognizing Institutionalized Philosophy of Religion of the Last 40 Years as “Traditional.”
I find it amusing every time I see phrases like “traditional philosophy of religion,” “the traditional God,” “traditional theism,” or even “the Christian tradition” in any works by philosophers of religion over the last forty years. When I see or hear this, their credibility drops—even if they position themselves as critics. Are traditions static things that can have definite articles attached to them? I suspect some readers might have “a” family tradition, but do you have “the” family tradition? I’m not out to equivocate on the word. Tradition as a concept helps us grasp and track historical processes of cultures whereby what is handed down from earlier generations is transformed and applied (or abandoned) by later generations. Intellectual traditions are especially dynamic. I’m thinking primarily of MacIntyre (1981; 1988) and Gadamer (2013) here, but also Fingerette’s re-reading of Confucius as a radically progressive “traditional” thinker (1998). Traditions include processes of both sedimentation and innovation, like literary or musical genres (as generators) for the surplus of books or songs within genres (as taxonomies).

The rhetorical veneer of “the traditional God” or other uses suggests an anachronistic projection from the last forty years that spans back through history, across what McRae calls the “string of pearls” model of intellectual or transmission genealogies (2003). When Augustine or Ibn Rushd says the word “god” do they really mean the same thing as when Swinburne or Wolterstorff says the word “god”? Yet supposedly they are all talking about the traditional god, whereas—say—Shankara and Ramanuja are not talking about the traditional god despite Advaita Vedanta being an intellectual tradition, or Tillich, Altizer, Abe, and Rubenstein are not talking about the traditional god despite death of god theology being an intellectual tradition inclusive of multiple religions. Of course, speaking for or about not just any god but rather about “the” god is more rhetorically potent. Speaking for or about not just any tradition but rather about “the” tradition is more rhetorically potent. But this doesn’t make dynamism of traditions into a thing. It’s not just representatives and accomplices of Plantingian influenced philosophy of religion over the last forty years. It’s also critics like Schilbrack (2014). My point is, echoing Catherine Bell, that reformed epistemologists and critics alike “traditionalize” philosophy of religion—a strategy deployed in the present to construct and anachronistically project backward a fixed construct (1992, p. 124). The misrecognition is that this process is happening in the present, like a form of unnoticed cultural appropriation where a fundamentalist like Craig appropriates kalam to serve a peculiar version of Christian theist literalism. Institutionalized philosophers of religion appropriate as solely their tradition figures or topics such as Anselm’s “ontological argument,” though alternative trajectories for this show up in Schleiermacher and Scharlemann (1981).

II. Philosophy of Religions is not a Field or Discipline but a Branch of the Discipline of Philosophy.
As someone tasked with curricular designs for both philosophy and religious studies programs at multiple colleges, I need to note some practical considerations that ought to provide liberating constraints (that is, some sedimentation from which innovations can come to the foreground). I want to return to the call for contributions again. DuJardin refers to philosophy of religion both as a “field” and as a “discipline.” Which is it? This matters for locating philosophy of religions in broader university and college contexts, especially given the growing popularity of what passes for “interdisciplinary studies.” Moreover, it’s crucial for both assessment and accreditation. Allow me to explain briefly.

I think it is crucial to keep disciplines roughly distinct from one another, as well as to keep these distinct from fields or areas. This serves two purposes: a) clarifying how a study is actually inter-disciplinary; and b) exposing what categorizations are actually problematic and need revision. Let’s take an example in terms of standard programs in a college of liberal arts and sciences. History—a standard discipline defined by both method and subject matter—is distinct from Communication Studies—a standard area study defined by subject matter but not by method. That is, as an area study or field, Communication Studies is already intrinsically interdisciplinary, bringing to bear multiple disciplines (history, psychology, linguistics, etc.) on a common subject matter. The same distinction can be made between Philosophy (a standard discipline) and Religious Studies (an already interdisciplinary area study). I want to note that programs have to do with curricula, majors, and minors—goods internal to disciplines and area studies. Departments, however, are institutionalized managerial processes. We could, for example, have a department with an administrator or Chair responsible for Math, Spanish, and Religious Studies programs. Departments do not need to be aligned with programming, though they often are. It is usually only in small liberal arts colleges where Philosophy and Religious Studies are combined in one department and even one program, but often Philosophy is an entirely separate program from Religious Studies even if these are in one department.

For me, the most important clarification in this discussion is for college courses, specifically how to keep philosophy of religions courses relevantly distinct from World Religions courses. Given challenges to the World Religions paradigm and questioning whether Religious Studies programs should maintain complicity with these colonial categories (Masuzawa 2005), I think it is worthwhile to propose re-envisioned philosophy of religions courses as possible replacements for this introductory level course in Religious Studies programs. Nevertheless, many approaches and topics raised in re-envisioned philosophy of religions (such as focusing on practices, or addressing contemporary crises such as climate change, or including multiple traditions, or engaging critical theory and feminism)—all these are often already happening in critically self-conscious World Religions courses and books. What’s the difference—in terms of learning outcomes, measurable targets, and accreditation—between re-envisioned philosophy of religions courses and World Religions courses? It’s amusing to me when colleagues in this discussion say these questions aren’t important. They probably haven’t had to be a department Chair serving multiple programs, experiencing upper-administrators trying to dabble in curricular control or even hiring decisions. I don’t think the learning outcomes or accreditation criteria are sufficiently considered in these exciting and expansive and imaginative conversations. I have tried to argue some of this in philosophical analyses of accreditation criteria for religion-affiliated colleges (Dickman 2020). I hope this provokes some practical orientation for future coalitions.

TL; DR: Two takeaways:
-Stop referring to myopic Christian theism as “traditional theism” or “the philosophy of religion.”
-Keep philosophy about religion as a branch of the discipline of Philosophy, instead of trying to frame it as its own distinct field (or discipline, or area studies).

Fingarette, Herbert. 1998. Confucius: The Secular as the Sacred. Waveland.

Masuzawa, Tomoko. 2005. The Invention of World Religions: Or, How European Universalism was Preserved in the Language of Pluralism. Chicago: The University of Chicago Press.

Scharlemann, Robert. 1981. The Being of God: Theology and the Experience of Truth. New York, NY: Seabury Press.