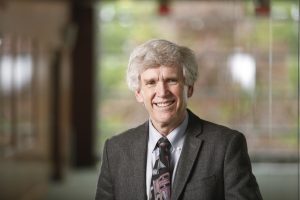 David Basinger is Professor of Philosophy and Ethics at Northeastern Seminary. We invited him to answer the question “What norms or values define excellent philosophy of religion? as part of our “Philosophers of Religion on Philosophy of Religion” series.
As I see it, one of the most important values that should be instilled/reinforced by excellent philosophy of religion is epistemic humility, defined as the acknowledgement that equally knowledgeable, sincere individuals differ on almost all significant religious issues.

We initially acquire our beliefs, including any religious beliefs, in at least two ways. Some are subconsciously soft-wired into us. Specifically, most of us subconsciously acquire soft-wired beliefs about what our world is like in general and the nature and status of those different from us in particular. Other beliefs are acquired early in life from parents, religious leaders, school teachers, and friends. Such beliefs increase our understanding about the nature of reality, including the status of those different than ourselves, and how we ought to behave in the world as we see it.

The good news is that if we acknowledge these shaping influences and consciously reflect on our beliefs and the beliefs of our epistemic competitors – that is, purposefully engage in comparative assessment of why we and those who hold differing perspectives on those bestowed beliefs that seem to us both normal and correct – it is possible to refine, modify, or give up these initial bestowed beliefs. The bad news is that our normal, natural epistemic state is not to engage in objective, comparative belief assessment of bestowed beliefs – to rationally view the relevant evidence and lines of reasoning and reaffirm, modify, or relinquish our bestowed beliefs. Rather, our normal default response to challenges to our bestowed beliefs is to defend these beliefs. They become the control beliefs by which we interpret, assess, and ultimately explain away seeming counter-evidence.

In addition, I believe there to be what some see as an important limitation on what serious comparative belief assessment can accomplish. As argued in other contexts, I deny that there exists a set of objective, non-question-begging criteria in relation to which we can demonstrate that many of our bestowed beliefs on important social, political, economic, moral, and religious issues are in fact superior to all other competing perspectives on these issues. Rather, I hold that in most cases, serious comparative belief assessment will force us into the epistemically humble position of acknowledging that equally sincere, knowledgeable individuals can justifiably affirm differing self-consistent, comprehensive perspectives on such issues.

To be epistemically humble in this sense does not mean that we cannot hold our beliefs firmly and act upon them. However, it will significantly alter how we in engage in discussions with our epistemic competitors. If we believe there to be objective, demonstrable evidence that our perspective on a given issue is alone the correct one, then our goal in discussions with those holding differing perspective is rightly to help them see the truth – i.e., to help them see that they are missing crucial information or not processing that information correctly – or to challenge their sincerity – i.e., to speculate on why they are unwilling to acknowledge what they really know to be true. If, however, we believe that some of our epistemic competitors have as much information as do we, are processing it in the same fashion, and are as dedicated as we are to finding the truth of the matter – i.e., truly are our epistemic peers – we are then much more likely to engage in respectful, civil discussion of the issue in question, with the primary purpose to encourage our competitors to reconsider their perspectives rather than to belittle their intellectual capacity or accuse them of having a morally deficient hidden agenda. And, from my perspective, there’s never been a more important time for all to engage in epistemically humble discussions that will not only preserve respect and dignity but also afford us the best chance of being able to arrive at productive responses to differences that must be resolved.

I believe that philosophy of religion, when functioning as the study of diverse religious beliefs, is well-suited to encourage epistemic humility.

Individuals don’t become epistemically humble because they are told they have no compelling reason to deny that their epistemic peers are equally knowledgeable or sincere. Rather, it’s been my experience that individuals are most likely to become epistemically humble when they become aware of meaningful epistemic tensions in their own belief system. It’s clear that religious beliefs are meaningful in that they often significantly impact how individuals explain their life experiences and justify their behavior toward themselves and others.

The tensions that lead to epistemic humility are of two types. First, individuals often find themselves becoming more epistemically humble when they discover that some of their significant bestowed beliefs are inconsistent with each other. Since important religious beliefs about God’s attributes and behavior or about the negative impact of religion are often acquired from different authority figures at different times, it’s not surprising that such beliefs are often inconsistent. When individuals come to see that this is so, they often experience an internal tension that compels them to assess the relevant beliefs in an attempt to resolve the tension. For example, religious believers often experience tension when their general view of God’s control over all things is not compatible with the role they believe human freedom plays in what occurs. Second, individuals, including religious individuals, often find themselves becoming more epistemically humble when they come to see that those who possess the same information and the same criteria for interpreting this information differ on significant issues. For example, when believers come to realize that other believers who hold the same forms of authoritative divine revelation differ significantly on an important issue, they often naturally find themselves engaging in belief assessment to discover why this is so.

Developing epistemic humility is clearly not the only role for philosophy of religion. But the current state of dialog around issues of significance leads me to believe that none is more important.