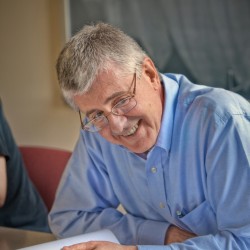 Stewart Goetz is Professor of Philosophy at Ursinus College. We invited him to answer the question “What does philosophy of religion offer to the modern university?” as part of our “Philosophers of Religion on Philosophy of Religion” series.

To the extent that the modern university is interested in the most basic questions of human existence, it should include among its disciplines the philosophy of religion, because the philosophy of religion provides an extremely relevant intellectual forum for raising and addressing these fundamental questions in a thoughtful way.  For example, of great interest to most people is the topic commonly referred to as “the meaning of life.”  In the minds of many people, to ask “What is the meaning of life?” is to ask “What is the purpose of life?”  And the idea of the purpose of life suggests to these individuals the idea of a creator who made them for that purpose.  The response of many, if not the majority, in the modern university is “But there can be purposes in life without a purpose of life!”  Perhaps so, but the important point is that a discussion has been opened that is naturally situated within the philosophy of religion.

A discussion has been opened, but connections with other philosophical topics exist to be explored.  Foremost among them is the idea of what counts as a legitimate explanation.  The claim that there can be purposes in life without a purpose of life assumes that there can be purposeful explanations.  What makes this assumption particularly fascinating in the present context is that most of those who argue for the possibility of purposes in life without a purpose of life are naturalists, and naturalists more often than not define themselves as those who look to modern science for guidance in thinking philosophically about issues.  This raises the question “What is science?”, to which the answer, more often than not, is something like “the discipline that insists on ultimately explaining things without any appeal to the concept of a purpose.”  But if this is the gold standard for explanation, then presumably there cannot be any irreducible purposes in life, let alone a purpose of life.

Naturalists are typically Darwinians who think not only that all explanations must ultimately be purposeless in nature but also that the paradigm for purposeless explanations are adaptive explanations found in biology: e.g., the explanation of X’s existence is that caused but purposeless changes resulted in X and X, under the prevailing circumstances, proved advantageous for survival and reproduction.  And once again we are back into the thicket of the philosophy of religion.  Because like it or not (and most naturalists do not like it), many, many people have religious beliefs.  Why so?  Naturalists maintain that it must be because those beliefs proved to be adaptive.  Or if they were not adaptive, then they must be the effects of something else that did prove adaptive.  And the truth of these adaptive beliefs?  There is no reason to think beliefs that turn out to be adaptive need to be true, because it is having the belief, not its truth, which is adaptive.  This will come as news to many religious believers.  They think, apparently wrongly, that they have reasons which explain their religious belief (leaving aside whether those reasons are good or bad).   Not surprisingly, the more sophisticated religious believer will wonder about the explanation of the naturalist’s belief in naturalism and Darwinism.  Presumably, the naturalist believes these things because believing them proved to be adaptive.  But those beliefs, too, could be adaptive without being true.  The philosophy of religion quickly proves to be home to some very interesting philosophical discussions.

Someone might interject that the discussion so far has assumed that what needs to be explained is religious belief.  But religion is about more than, or other something other than, belief.  Many think religion is about communal activity (e.g., taking care of each other, worship).  Belief is at best secondary.  But even under this understanding of religion, the question of what explains the communal activity must be answered.  Of course, the naturalist will insist the correct explanation of it is purposeless and adaptive in nature.  And the more sophisticated religious person will now want to know what explains the communal activity of scientists (because surely scientists form their own community as much as religious persons do).  Presumably, it, too, must be explained in purposeless, adaptive terms.

This discussion of the importance of the philosophy religion for the modern university began with a question about the meaning of life and an answer in terms of a purpose of life.  But there are other ways to understand the question “What is the meaning of life?”  One that is reasonable is “What, if anything, makes life worth living?”  And, once again, this is a question very much at home within the philosophy of religion.  It is a question naturally answered in terms of something of value, whether it be a moral virtue or virtues, worship, or even pleasure.  An issue going back at least to Plato’s Euthyphro is whether something has its value intrinsically or instead gets it from a decision or command of the gods.  And there is the broader issue of whether the existence of values makes more sense within a religious framework, or whether it is equally or more sensible within, say, a naturalist framework.

With mention of things making sense, there arises yet another way of understanding the question “What is the meaning of life?”, which is “What, if any, way is the best way to make sense of things?” Does the best way of making sense of things require an afterlife?  Does it require a soul?  And these are obviously questions that are appropriately addressed within the philosophy of religion.  But perhaps it is best to close with a slightly different question: “Does an education provided by the modern university make much, if any, sense without inclusion of the philosophy of religion?”  It seems it does not, because to exclude the philosophy of religion is to exclude the deepest concerns of human beings.  And if we are going to exclude these from the modern university, why have an educational system at the university level at all?