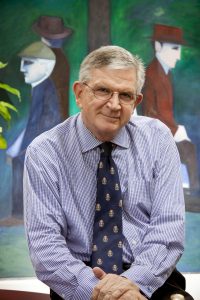 Raoul Mortley is Executive Dean and Pro Vice Chancellor of the Faculty of Society and Design at Bond University, Australia. We invited him to answer the question “What does philosophy of religion offer to the modern university?” as part of our “Philosophers of Religion on Philosophy of Religion” series.

The value of the philosophy of religion in a curriculum and in a general education lies in the ability to explore a great many different things, not ordinarily covered in a philosophy curriculum. In the first place there is the standard menu involving the deployment of logic, the acknowledgement and understanding of traditional arguments for the existence of God, the analysis of their weaknesses, and the intellectual texture to which they belong. Thus ordinary argumentation is learned, including the ability to mount arguments in support of the case, and the ability to make arguments against a case. But equally the context of belief is important: what people have believed and why they have believed it.

The argument from design fits into a general approach which is teleological, and this fits into an approach which goes back to Aristotle, Plato and earlier, and gave way in the face of scientific revolution. This all needs to be understood so that we can look with a critical eye on the orthodoxies of our own time, and to try to glimpse their limitations. This of course is always easier in retrospect, but it is an important part of self-understanding to learn that orthodoxies eventually come to their term.

Many other and similar points could be made about the traditional arguments for the existence of God and where they fit into the history of world thought.

There is a second issue to do with the exploration of the full capacity of the human being. This is what Plato does in the Phaedrus, which begins with a kind of symptomatology of the ordinary experience of erotic behaviour, but then turns to the blessings of madness, or of mania, and the capacity for mystical and transcendent apprehension of things. What might now be closed off as a discussion of bipolar disorder, is fully developed by Socrates into a eulogy of the ecstatic, extra-logical apprehension of higher things: this also arises out of an observation of human behaviour in ancient Athens, that of the mystery religions and of the maenads of the Dionysiac rites. Here is human nature in its fullest expression, pursuing a form of knowledge which may be wordless, beyond logic and beyond knowledge itself, under certain definitions.

The idea of the unspeakability of the divine, and the tradition of the via negativa, broaden the scope of the philosophy of religion considerably and bring to bear a certain scepticism over the value of language, and the confidence we might have in our form of knowledge. This opens up a broad sweep of ideas running from Plato’s allegory of the cave through to the mediaeval Platonists.

If one moves into the theological realm and discusses for example the nature of Christian love, and its contrast with the eros of the Greeks, its apparent passionlessness, its approximation to duty – all these kinds of issues give a deeper appreciation of human nature and of the possibilities of philosophy than one might encounter in other courses. This is not to say that one abandons one’s critical faculties, or the ability to point out contradictions and limitations, nor is it to diminish other disciplines, such as political philosophy, or the philosophy of mind. Rather, it is to say that the philosophy of religion provides not only training in reasoning and argumentation, but also a rich insight into human nature and human capacity. The more involvement with theology there is, the richer is the consideration of human life, its opportunities and its dead ends. This kind of richness is greatly appreciated by students.